Dr. Farah Zahir is a medical genomics scholar and also holds authorization as a spiritual guide and teacher in the Islamic science of Ihsan (spirituality/cosmology). 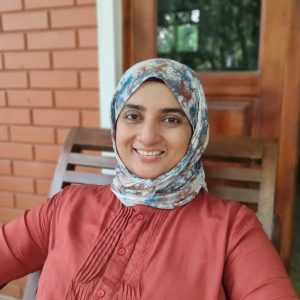 While having taught Islam from a young age, and having taken numerous courses in advanced Islamic studies, her training as a shaykha began under the guidance of Imam Fode Drame, a pre-eminent scholar of the modern age. Imam Drame hails from the Jahanke peoples of the SeneGambia region of West Africa – Islamic spiritual masters with over 11 centuries of recorded scholarship, who trace their lineage to the closest friends of the prophet Muhammed (peace be upon him). Upon completing her suluk (spiritual wayfaring) with her guide, she went on to establish the Irfa’a Foundation (www.irfaa.ca), an organization dedicated to elevating the human consciousness through sincere connection to the One Divine. She teaches at the Foundation and serves as its Director. She has published four volumes of spiritual writing as part of the ‘Qabas’ (burning torch) series, with Ras-al-Haq publications. She is currently preparing two other texts on Islamic cosmology.

As an internationally recognized authority on neurodevelopmental disease genomics, Dr. Zahir continues to be involved in medical genetics research and teaching. Currently she serves as a ‘Genomics Specialist’ at the University of British Columbia (UBC) Canada, where she is developing courses and instructing in a new international ‘Genomic Counseling’ certificate program. She completed her PhD in Medical Genetics from the Faculty of Medicine, UBC, in 2011, being one of a handful of scholars to achieve UBC’s highest doctoral accolade- nomination for the Governor General’s Gold Medal. She won the prestigious James Miller award from the Department of Medical Genetics for the best dissertation bridging clinical and basic science. She has identified either directly or indirectly nine new Intellectual Disability syndromes, discovered several new genes and contributed to our understanding of how the environment impacts the genome. Currently she bears an H-index of 15, having published 25 scientific publications all in top tier journals. She was awarded eight prestigious funding awards, and was named Canada’s top 6th young investigator as a Post Doctoral Fellow. She served as an Assistant Professor in Genomics and Precision Medicine in Qatar, being also on the committee to set up this select graduate program. She was awarded competitive national grants to conduct research in neurodevelopmental epigenomics, and she was a co-investigator on funded grants for Islamic ethics and genomics. Currently she is genomics research consultant, in addition to her heavy involvement in graduate level education and research in medical genomics.