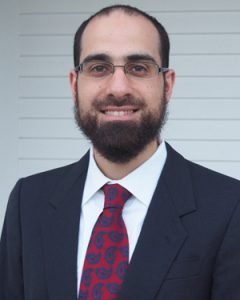 Dr. Khalid Elzamzamy, MD is a psychiatry fellow at Hamad Medical Corporation in Doha, Qatar. He is also currently completing his Master’s degree in Islamic Ethics at Hamad Bin Khalifa University, also in Qatar. Having received his medical degree from Ain Shams University, Egypt, he is an active researcher and scholar, previously serving as a research assistant at Yale University, and currently as a Research Fellow at the Family and Youth Institute and the Alkaram Institute.

Dr. Elzamzamy’s interests include investigating the history and current practice of mental health in Arab, Muslim and migrant communities, as well as the interplay between mental health, culture, spirituality, and religiosity.

About his Islamic Psychology Fellowship research:

Suicide is a multi-faceted global phenomenon that is frequently viewed as a manifestation of the interaction of many factors including mental illness, social injustice, and weakness of faith. Suicide is also a public mental health challenge. This project focuses on how suicide and life-threatening behaviors are conceptualized and approached in mental health practice vis-à-vis the Islamic religious discourse and practice. Through a critical discourse and analysis of Islamic religious texts and fatwas (verdicts), the project aims at navigating the theological, legal and ethical dimensions, principles, and arguments put forth by Muslim religious scholars when dealing with individuals with life-threatening behaviors and suicide-related questions and rulings. The project also aims to propose potential reconciliatory approaches that attempt to combine both psychological and religious perspectives into care models that can be utilized by mental health professionals and religious scholars alike when dealing with cases of suicide and life-threatening behavior.